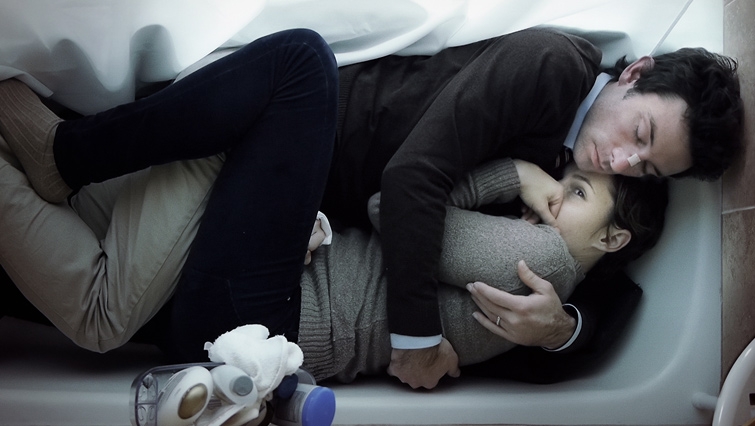 I know I’ve already asked this question, but I wonder how much I would have liked Upstream Color (UC) if I hadn’t known anything about Shane Carruth?

I posed a similar question in my review of Joss Whedon’s Much Ado About Nothing. You’re welcome to read my entire review, but briefly, I wondered how much I would have liked Whedon’s lightning-fast production of Shakespeare’s comedy had I not known that he shot it in 12 days while on a contracturally mandated break from The Avengers. My fear is that I gave Whedon’s movie too much of a free pass; that I judged it with a handicap (in the golfing sense) instead of weighing its pros and cons with a dispassionate eye.

So let’s pivot over to UC. It’s hard for me to exaggerate how much I like Shane Carruth’s two movies. Primer will likely go down as one of the greatest science-fiction tales of all time, and his long-awaited follow-up, UC, although it also inhabits a science-fictional terrain, explores a completely different set of themes with a storytelling structure that’s the exact opposite of his freshman effort in almost every way.

I find it to be a terrific success. It’s deeply weird, packed with rhythms and imagery that keep its audience as off-balance as its two perpetually-in-convalescence lead characters. Carruth, who had already proven himself a talented cinematographer in Primer, is back at the helm in UC, crafting a succession of scenes that combine blurry urban cityscapes, bucolic nature shots, and extreme closeups — including some effects that emulate the look of macrophotography.

Also, his backgrounds move. I didn’t keep count, but a great many of his scenes feature human subjects fixed in place against a living, breathing, seething, moving background. Hallways and mallways scroll past while the leads ride an escalator. An apartment rotates around the two new lovers like a compass. Bedsheets slitherunderneath a prone woman like slimy, sexy fingers.

But let’s talk about context, and by that I don’t mean the context of any one scene in UC. I want to talk about the larger context of the movie itself. As in, when I sat down to watch this one, I knew the whole story of Shane Carruth’s triumph at the 2004 Sundance Film Festival; how he left his job as a programmer to make an independent movie for $7,000; how he packed it with scientifically literate jargon and speech-patterns; how he shot it in a series of unglamorous locations with no special effects.

I knew the story. And I waited the wait.

Just like every other fan of Primer, I waited for years for Carruth’s follow-up. It wasn’t until this year, 2013, that we got it. And I loved it.

But damn is it weird.

I mean, it’s really weird, and part of me wonders if Carruth’s reputation and personal narrative didn’t somehow distract all of us from just how weird it is. A glance at Rotten Tomatoes shows us that Carruth’s movie scored 86%, even better than Primer. The reviews for UC are similarly ecstatic: “Cerebral,” “mournful,” “intoxicating,” “splendid.” But then there are the dissenting voices: “Impenetrable,” “baffling,” “too-clever.”

There’s a fair debate to be had here. It’s a debate that essentially ends with a proclamation that the emperor has no clothes, and while I think the emperor (Carruth) is dressed in fine silks, a great many critics found UC too strange, too baffling — just too much on all counts.

Full disclosure: Part of my review includes content that I originally posted as a comment on the Fanboy Comics website, one of my favorite places on the web. Film critic Ellen Tremiti was one of UC’s many dissenting voices. Her whole review’s worth reading, but here’s an especially strong passage:

The imagery leads to several dead-end concepts, instead of weaving together and circling back to previous plot points, which could have created an over-arching narrative. Instead, other labored, yet random, imagery hints at quite simple themes that aren’t exactly novel (i.e.: the circle of life). I was hoping for more narrative, just enough to be able to have some thoughtful discourse on what I had just witnessed. It was not there. Yet, somehow, this film has been given a lot of leeway by reviewers. As Arrested Development’s Maeby Fünke once said, “No! Deep is good! People are going to say, ’What the hell just happened?’ And, I better say I like it, because nobody wants to seem stupid!”

There’s that “emperor’s new clothes” talk again. Although I disagree with Tremiti’s review — and with all of the dissenting voices about UC — I’m also moved to consider whether there’s another equally strange project out there that’s been denied the attention given to UC simply because it’s not a Shane Carruth movie. Undoubtedly, there is, and there are.

That said, I’m glad that Carruth’s reputation has given so many people the chance to sit down and ingest such a deeply strange narrative. Carruth’s been compared to David Lynch, and while I can’t quite draw a straight line between them, I will say that both fillmmakers have done the good work of delivering abstract storytelling to the masses. (Lynch on a far larger scale than Carruth, of course.)

So if I’m conceding that the narrative in UC is baffling, what’s left? Well, here’s where I think film analysis splits down two roads. There are countless ways to engage with a movie, of course, but I submit that at its very baseline level, you’re going to choose one of these paths:

PATH THE FIRST: You start with the movie’s literal narrative, and that’s fine. Some movies — or books, or TV shows — yield interpretative results through a concerted analysis of their literal narrative; as in, you look at the story and think about it, and that’s how you peel away its layers. For me, Breaking Bad is a perfect example of this. When you engage with Vince Gilligan’s drama of family and crime, you look at what happens: A mild-mannered teacher transforms into a monster trying to help his family. The show’s been called “Shakespearean,” and I think that’s apt, because Shakespeare is another storyteller whose metaphorical frameworks only emerge from the mist after careful consideration of his plots at a nuts-and-bolts level.

PATH THE SECOND: You think about how the movie makes you feel. Very often, I call these kinds of feel-y movies “tone poems.” (Yeah, yeah — I know. It’s lazy shorthand.) I think UC is more of a tone poem. It has a literal narrative, but just barely. I say that in contrast with other abstract movies that don’t have a literal narrative in any sense at all. You can describe UC’s literal narrative aloud, but I don’t think it gets you anywhere — and that’s where this movie frustrates even me.

Carruth’s first movie was all about its literal narrative. Primer’s thematic heft — a look at long-simmering rivalries and how they can suddenly explode into recrimination and violence, all through the prism of nerd/geek/working scientist culture — sprang directly out of its literal narrative. The movie was very plot-heavy, to its benefit and virtue.

But in UC, Carruth went to the antipode of Primer. UC’s literal narrative is — putting it charitably — very close to gibberish. Digging into it yields some results, I think. For example, I really like how Carruth advances the idea that memory and identity are as much an emergent feature, a side-effect, of our biology as anything else.

That said, UC’s real virtues — I think — are in how it so expertly portrays love among the outcast. The two leads (Carruth and Amy Seimetz) have both been severely traumatized after their ordeal with the grifter-mindwasher. In the movie’s literal narrative, that’s where the interpretation stops. They’re both in permanent convalescence.

But if you set aside the literal narrative and simply focus on their scenes, all of a sudden you’re watching (for example) two severely autistic people. Or two shut-ins. Or two hardcore geeks with borderline Asperger’s Syndrome. Not that any of those people — and I’m one of ’em — are by definition “outcast,” but I feel like a lot of UC’s power comes in how it shows the sideways, oblique, indirect ways that different kinds of people come to find love. Even the movie’s wackadoo literal narrative goes a long way toward throwing the audience off balance so that when the love story gets going, they’ll feel as confused and out-of-sorts as the two romantic leads.